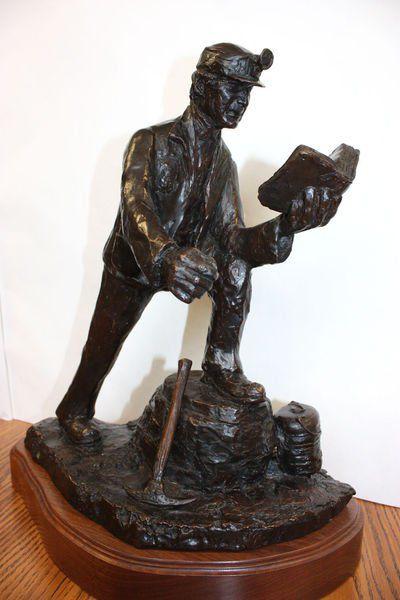 In a unanimous vote, the Allegany County Board of Commissioners recently approved the funding for a bronze statue commemorating the more than 650 lives lost in coal mining in western Maryland.  The funding consists of $75,000 in a state bond issue plus $75,000 in matching funds raised by the Foundation for Frostburg.

It will be located just north of the depot along an overlook beside the Great Allegheny Passage. Features will include a wall containing the names of approximately 650 miners who died between 1838 and 2007. Each miner will have a plaque with their name, age, hometown, number of dependents, date of death and mine where they died.

The memorial will also feature a bronze, life-sized statue of a miner wearing a helmet and holding a book in one hand and an apple in the other.

Total cost for the memorial is expected to be $200,000. Additional money for the project has been raised from sales of “Miner Recollections,” a book that contains stories of the miners who lost their lives. Six hundred books have been sold at $20 each.

“We are putting this memorial on county ground,” Barbara Armstrong said. “So, the county needs to be the beneficiary of this project. There will be dollars to maintain it, but it will be owned by the county and most likely insured by them. But, the county has to give us permission to place it there and we needed their signatures tonight to accept to do that.”

According to Armstrong, the Coal Miner Memorial is shovel-ready, engineering plans are complete, and bid documents are being prepared. Allegany County is assisting with the final funding package. She expects ground-breaking to be summer of 2023.