James Andrew Hott was born in 1872, the son of David Hott and Mary Louise (Miller) Hott. With limited job opportunities in the Georges Creek Valley, he became a coal miner like his father. 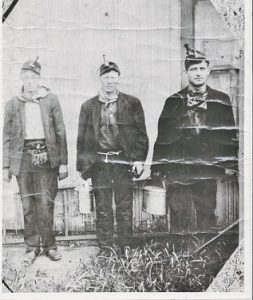 Andrew’s life was cut short on April 17, 1915 at the age of 33, while employed as the night foreman at Mine #7 of the Consolidated Coal Company. He was riding up the plane on a trip (a train) of empty coal cars when a hitching pin came out of the third car, releasing sixteen others. While in the act of putting down the brakes, the rope on the loaded cars coming down the track flew off the drum. Andrew was knocked against the side of the mine, breaking both legs. He died eight hours later at the Miner’s Hospital.

From his obituary in the Cumberland Times-News, we learn that Andrew was survived by his wife, Elizabeth (Anderson) Hott, residing in Lord, and three children: Freda, Louise and James Kern Hott, all under the age of six. Also surviving was his mother, Mary Louise, and four siblings, Idella (Hott) Anderson, Mary (Hott) Miller, Archie Hott, and William Hott. Elizabeth remained in the house she had shared with her husband and raised her three children. She later married George “Teddy” Tippen.

Andrew was the grandfather of local residents Belle Morgan and Patsy Thomas. These two sisters, the daughters of Freda (Hott) Rice, remember hearing the tragic story of their grandfather’s death. They also remember another tragic accident which killed the father of their Zihlman playmates, Peggy and Jeanne Armstrong.

Peggy and Jeanne’s father, Thomas Armstrong, was killed in one of the most gruesome accidents recorded. Thomas was a foreman and hoist runner at the Stowell & Armstrong Mine in Zihlman. On April 4, 1938, Thomas, age 38, was pulling the empty rope up the incline plane. He was using a pick handle to guide the rope onto the drum, and as he reached for the controls with his other hand, he lost his balance and fell. The moving rope wound over him, forcing his body into the revolving gears of the drum as the hoist continued to operate. The insulation on the electric motor which turned the drum began to burn. The area around the hoist filled with smoke, hindering rescue attempts by other miners. When the smoke and fumes dissipated, his co-workers were able to reach the hoist and release his body.

After the accident, the District Mine Inspector and electricians from the power company examined the hoist control equipment. They discovered that the safety fuse on the control had been replaced by two solid wires. The solid wires did not melt as the safety fuse would have done. The steady current to the motor allowed the gears to continue to grind. Laura Armstrong, Thomas’ wife, was no exception to the “pick up the pieces and move forward” attitude of the time. Widowed at age 33 and left alone to raise her daughters Peggy, age 13, and Jeanne, age 5, Laura received no financial or funeral expense compensation from the Bureau of Mines due to the nature of the accident. She took a job as a seamstress at the shirt factory, moved from her rented home into the home of her in-laws, John and Hettie Armstrong, and began the next chapter of her life. Belle Morgan remembers the miners carrying Thomas Armstrong’s body down the mountain in a coal car on the day he died. As I research our Recollections, I am constantly reminded of the strength and resiliency of the surviving family members.

The Committee would like to thank Patsy Thomas and Belle Morgan for their contribution to this “Recollection”.