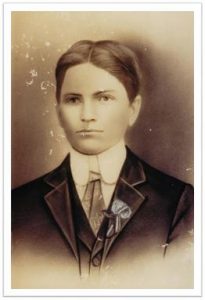 The Adopt a Miner Project has really opened my eyes to the plight and sacrifice of our mining families.

I have read over 555 fatal accident reports in my research for this project.

It’s made me sad, made me cry and made me proud to be a coal miner’s granddaughter.

In my research, I’ve come upon the stories of some of my own ancestors.
There were four brothers looking for work after the iron furnaces closed in the Shenandoah Valley. Joseph, John, Billy and James Drummond left the valley and moved west to the mountains of Frostburg. They left their widowed mother and sisters and came here to find work to support them.

Joseph, the oldest, worked in Frost Mine. He married and had one daughter. He was only married one year, his daughter only a few months old, when he was killed in the mine in 1900.

John was next to be born. I don’t know if he worked in the mines but I assume, since all his brothers worked there, that he did, too. John was about 20 years old when he was killed in a sledding accident. He was never married.

Billy was next to die, he was 19 when he was crushed between two loaded coal cars at the Frost Mine in 1903. During my research, I discovered that an empty coal car weighed 2,040 pounds. Billy lived for three days after the accident. Can you imagine the pain he suffered?

The fourth brother was James, my grandfather. He was the only brother to survive. My grandfather died from miner’s asthma when he was 54 years old. I never got the chance to meet him.

After hearing and reading about these four brothers, I wondered how my great grandmother ever survived the tragedies. I believe the men in those days carried the financial and physical burdens on their backs but the wives, mothers, and children carried the emotional burdens in their hearts.