We hear no more of the proposed hospital for miners. Several months ago the papers said that some influential citizens of Cumberland would try to get an appropriation from the legislature at this session to build a hospital in Lonaconing or Midland. Such a hospital is much needed, for men are being injured in the mines of this region every day. They are jolted home on stretchers or in wagons, and must await the arrival of the family physician, and do with such care and nursing as can be given them by the women of the family. With three coal miners from this county in the House of Delegates, it is reasonable to expect that something will be done towards the founding of a hospital on George’s Creek. There was talk, at one time of buying the Koontz residence in Midland as a site for the hospital, but interest in the matter seems to have died out. The philanthropist who would build and endow such a hospital would have his name inscribed in the Book of God, even ahead of Abon ben Adhem. However that may be, the hospital is needed and should be built without delay. It would not need to be a large concern and the patients would not be many at any time. The coal diggers on George’s Creek are hoping that the present legislature will make an appropriation for the hospital, and here’s a hint for Messrs. Ford, Dick and Smith.

Five years later, in 1913, the Miners’ Hospital at Frostburg was opened. 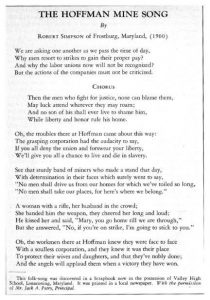 The Hoffman Mine Song
by Robert Simpson of Frostburg, Maryland (1900)

We are asking one another as we pass the time of day,
Why men resort to strikes to gain their proper pay?
And why the labor unions now will not be recognized?

(Chorus)
Then the men who fight for justice, none can blame them,
May luck attend wherever they may roam;
And no son of his shall ever live to shame him,
While liberty and honor rule his home.

Oh, the troubles there at Hoffman came about this way:
The grasping corporation had the audacity to say,
If you all deny the union and forswear your liberty,
We’ll give you all a chance to live and die in slavery.

See that sturdy band of miners who made a stand that day,
With determination in their faces which surely went to say,
“No men shall drive us from our homes for which we’ve toiled so long,
“No men shall take our places, for here’s where we belong.”

A woman with a rifle, her husband in the crowd;
She handed him the weapon, they cheered her long and loud;
He kissed her and said, “Mary, you go home till we are through,”
But she answered, “No, if you’re on strike, I’m going to stick to you.”

Oh, the workmen there at Hoffman knew they were face to face
With a soulless corporation, and they knew it was their place
To protect their wives and daughters, and that they’ve nobly done’
And the angels will applaud them when a victory they have won.

(This folk-song was discovered in a Scrapbook now in the possession of Valley High School, Lonaconing, Maryland.
It was printed in a local Newspaper.  With the permission of Mr. Jack A. Petry, Principal)