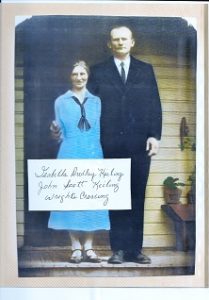 John Keiling was born in Maryland on November 28, 1880, the son of German immigrant Christian Keiling (1837-1924) and Rose/Rosa Cutter Keiling (1845-1927.) John was the seventh of their nine children. He married Isabella Dudley and soon started a family of his own. In 1910, John, a coal miner, and Isabella were living on Welsh Hill in Frostburg with four children: 7 year-old Cora, 5 year-old Ruth, 3 year-old John, Jr., and 18 month-old Mary. The family continued to grow with the births of Carl, Elaine and Frederick. By 1930, John, Jr. had followed in his father’s footsteps and was working as a miner. Carl was a bobbin winder at the Celanese. Ruth was married and living in a home of her own. Cora was also married and had a daughter named Gwennie. Sadly, Cora was not well and died in 1930 when Gwennie was just three years old. Gwennie’s father, perhaps overcome with grief, returned to his home in Virginia, and was later killed in a car accident. Little Gwennie went to live with her grandparents, John and Isabella. The same illness that claimed Cora soon took the life of Isabella in 1931.

The Annual Report of the Mine Inspector lists three fatal accidents in 1936. One took place at the Midlothian Mine of the George’s Creek Coal Company. Located about two miles west of Frostburg on the Cumberland & Pennsylvania Railroad at Midlothian, the mine had two openings working the Tyson coal seam. It was ventilated by natural means. The mine employed a total of 52 men: 43 miners, 2 drivers, 5 inside laborers, and 2 outside laborers. Those 52 employees removed a total of 20,977 tons of coal from the mine in 1936, digging by pick only. On August 31, 1936 at 2:35 PM, John Keiling and several other men were cleaning up a wrecked trip, placing the cars back on the track. John had replaced a sheave wheel (a wheel with a grove for a rope or cable to run on) that needed a brace to hold it in place. He had sounded the rock and knocked a small piece of it off the edge of the roof to make it smooth for the brace. Without warning, the roof fell, killing the 54 year-old laborer instantly. John Keister, mine foreman, and several other men were present, but were not injured. The Keiling family was given a direct payment of $5,000.00 and $125.00 for funeral expenses.

The tragic mining accident that killed John, Sr. left Gwennie without a mother, grandmother, and grandfather before the tender age of eight. Her aunts Ruth and Elaine assumed the duties of surrogate mother. Accidents and illness had taken a terrible toll on this family. These circumstances, however, did not dampen their sense of fun and adventure. Carl, better known as “Chuckles” Keiling, built a bowling alley in Wright’s Crossing, creating fun and fond memories for many of us. If you have lived in the George’s Creek Valley for more than fifty years, you may remember “Chuckles” flying over roof tops, buzzing the trees, and tipping the wings of his Piper Cub and Baking Deuce in a jolly greeting to those below.