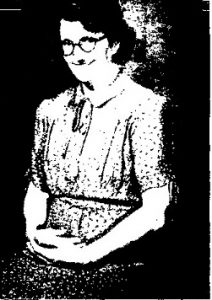 Catherine Elizabeth Pryle grew up in Vale Summit, surrounded by coal mines and miners. She was the daughter of Irish immigrants John and Catherine (Doughtery) Pryle. Young Catherine was only eight years old when she began helping her mother with household chores; having five miners in the family created a great deal of work. In 1880, all four of her brothers (Patrick, 21, Thomas, 19, Francis, 13 and Michael, 12) worked with their father in the underground mines surrounding Vale Summit. Catherine and her mother were up before dawn, firing a wood stove to prepare a hearty breakfast and pack lunch buckets for five hungry men. Their days were filled with cooking, baking bread, cleaning, gardening, canning, and a myriad of other chores. When the men came home, water was carried from the pump and heated on the stove for baths. There must have been a mountain of black sooty clothes on wash day: the scrub board came out and the clothes were hung out to dry, regardless of the weather. They say a woman’s work is never done, and for Catherine and her mother, that was true. 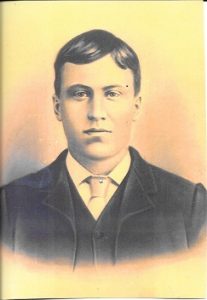 Unlike Catherine Pryle, John Shertzer did not grow up in a coal mining family. His parents, Leonard and Barbara (Hopach) Shertzer, were German immigrants, residing in Cumberland. Leonard made his living as a junk dealer and shoemaker. Barbara had a full time job caring for the needs of her husband and ten children. Catherine met, courted, and eventually married John Shertzer in 1892. They set up housekeeping in Cumberland.  John was first employed at the Rolling Mill, then later as a fireman, a railroader, and an engineer at a milk company. He worked hard in order to support their growing family. Nine children were born between 1892 and 1913: Prema, William Jennings, Florence, Edward, Helen, Joseph, Loraine, Catherine and Vincent.

John and Catherine moved their family to Vale Summit, the mining community where Catherine grew up, sometime after 1910. Like many coal mining families, their home was not far from the mine where John worked. The Montel/Mertens No.1 Mine was described as a drift mine, and was reported to have a “roof of good character, so timbering was neglected.” Coal was mined by pick, blasted by black powder, and hauled by mules to a side track inside the mine. It was then lowered by a hoist down a 3,800 foot slope and moved by a gasoline motor through a 3,200 foot tunnel. When the coal reached the tipple, it was dumped into railroad cars on the tracks of the Western Maryland Railroad. Ironically, this “roof of good character” was the cause of the accident that took the life of John Shertzer on September 14, 1916. John and his son Edward, age 15, were working in a six foot seam and had just started to mine when a large rock (4’8” long, 2’ 7” wide, and 20”thick) gave way, falling on John. He was rushed to Miners Hospital, where he died one hour later. Catherine remained in her Vale Summit home and raised their children alone, still surrounded by coal mines and miners. Her favorite miner, however, was gone.