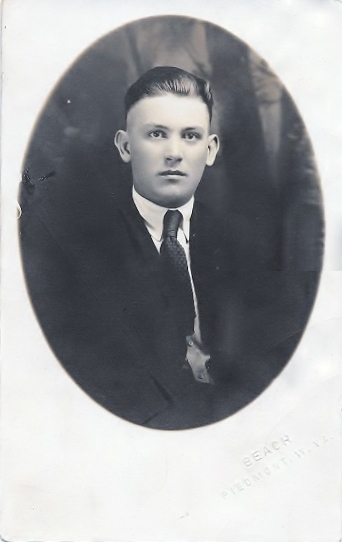 Norman Russell Michael, born July 23, 1885, was the second son of Horace and Mary Martha (Fazenbaker) Michael. The parents were blessed with seven sons and two daughters. In 1910, Horace, age 50, and sons Walter, 24, Norman, 22, Edward, 21 and Benjamin, 20 worked in the underground mines of Piedmont, WV and Westernport, MD. The family faced two tragic deaths in 1914 when father and son, Florian Dewey Michael, age 16, died. Research has not revealed the cause of their deaths. Was it a mining accident or one of the many diseases which plagued families in the early twentieth century? After her husband’s death, Mrs. Michael was supported by her sons until she died in 1932 at the age of 68.

On February 2, 1942, Norman Michael was killed by a fall of roof coal in Moran Mine, a small mine operated by Rex Frankland, Mr. Michael and Mr. Davis. The men had set a king bar and were removing the legs under a cross bar. When the second leg was cut from the cross bar it weakened, placing too much weight on the king bar causing it to twist out of place, permitting the roof to cave in from rib to rib. Mr. Frankland, seeing the fall start, tried to save his friend.

Mr. Michael was 57 years old and lived with his sister, Bessie Clark, at the time of his death. He was also survived by another sister, Mary Grove, and brothers, Walter, Edward, Benjamin, Elza and Vista “Curtis”.

Five years later, Rex Frankland who had tried to save his friend, was the victim of a similar accident. On December 15, 1947, Mr. Frankland was on his knees shoveling coal into a mine car at Mill Run Mine No.1 of the Campbell Coal Company when he was caught by a fall of coal and rock. Coal had been shot loose under the top bone coal and Rex was reaching under the bone with his shovel for enough coal to finish loading the car when the roof fell. He suffered a fractured skull and facial fractures before dying of inner cranial hemorrhage. He was 48 years old.

He married Katie Moran in 1921 and rented a house in Piedmont, WV where they raised two daughters. Katie often said that Rex would rather be hunting or fishing instead of working. Perhaps he should have gone hunting for a Christmas turkey on Dec 15th.  He left a widow, his daughters, Madeline Blackburn and Jean Britcher, a sister, Mrs. Thomas Sine, and five brothers, Roy, Albert, Benjamin, Clyde and Rolland and two grandchildren to mourn his tragic death.

Our committee would like to thank Norma Britcher Davis for the picture of her grandfather.