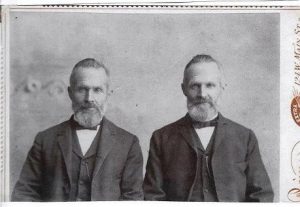 Photograph of Mungo Walker with his twin, brother, Quinton.

St. Mungo is the patron saint of Glasgow, Scotland. A story is told that St. Mungo saved the life of Queen Languoreth of Strathclyde who was suspected of infidelity by her husband. King Riderch demanded to see a ring, which he claimed she had given to her lover. In reality the King had thrown it into the River Clyde.

Faced with execution she appealed for help from Mungo, who ordered a messenger to catch a fish in the river. On opening the fish, the ring was miraculously found inside, which allowed the Queen to clear her name.

Mungo Walker and his twin brother, Quinton, were born in Straiton, Alyshire, Scotland in 1834. Both were coal miners by the age of 17, as was their father, William Walker. Mungo married Catherine and Quinton married Jane on the same day in Scotland.

In 1880 Mungo was living in Lonaconing, MD with his wife and their children. His twin brother, Quinton, and wife were living in Sandstone, Jackson County, Michigan. Both brothers were mining coal.

The Annual Mine Inspector’s Report for 1880 lists Mungo Walker as fatally injured by a fall of breast and top coal in that accident.

A search for Mungo’s widow, Catherine, was fruitless in the census records until she was discovered in Blackman Township, Jackson County, Michigan at age 64 and Mungo was there too! He was 65, working as a janitor. He and Catherine had been married for 40 years, they had eight children with only two living. Michigan death records tell us that his twin brother, Quinton, died in 1901 in Saginaw, Michigan of pneumonia. Mungo died June 29, 1913 at 79 years and Catherine died five years later, age 84.

An article was published in the Jackson Citizen newspaper on August 19, 1884 about the twin brothers, so it seems Mungo moved to Michigan not long after his accident.
It is rewarding to discover a man “crushed by coal” that survived and lived a long life. Did St. Mungo have any part in saving another life- perhaps his namesake?