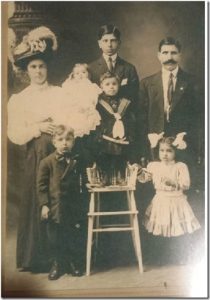 Pietro Bommicino was born March 21, 1895, in the small town of Zumpano, Italy. Zumpano is nestled in the verdant mountains of Cosenza Province, on the instep of the boot of Italy, and is surrounded by lush vineyards.

Pietro was the first child born of Pasquale Bommicino and his wife, Theresa Imbrogno Bommicino. No one seems to know what Pasquale’s occupation was in Italy, or why he decided to come to America. But come he did, on March 3, 1902, aboard the ship New England. He was 29 years old. Three years later, on Nov. 29, 1905, 28-year-old Theresa and 9-year-old Pietro arrived in America aboard the Furst Bismarck.

The Bommicino family was living in Morantown in 1910, and Pasquale was employed as a coal miner. Pietro, now 14, soon joined his father in the Union No. 1 Mine of the New York Mining Company, located near the town of Allegany (Zihlman) on the west side of Jennings Run. The mine was reached by a short branch road of the Cumberland & Pennsylvania Railroad.  It was a drift opening into the Big Vein coal seam. The coal was hauled out of the mine by horses, and was taken to the tipple by an electric third rail motor.

On May 22, 1913, “Peter” Bommicino, as Pietro was then known, had his leg severed when he fell under a coal car at the tipple. He was taken to his home, where he suffered in agony for two days before expiring on May 24. He was gone too soon, at just 18 years of age. He didn’t live long enough to meet all of his siblings, play with his nieces and nephews, marry, or have children of his own.

Peter’s niece, Theresa Sacco Thomas, remembers the frequent, solemn journeys she made with her mother, Annie Bommicino Sacco (Peter’s sister) to the gravesites of Pietro and his baby brother. The infant, born after Pietro’s death, had also been named Pietro, in memory of his big brother. Prayers were said and flowers were laid as Annie grieved for her two brothers. Both are interred in St. Michael’s Cemetery in Frostburg, high above the sooty Union No. 1 Mine, overlooking the green hills so similar to those of Zumpano, Italy.