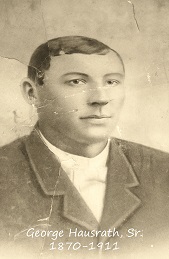 But will my boy have the chance to do
The things I’ve never done
Or will he like me be told
That he must be his father’s son?

John and Catherine Hausrath were married in Germany in 1866. In 1882, the couple and their five children boarded the ship Stella in Amsterdam and disembarked on the shores of America at New York City on June 30th.  The family settled in Lancaster, PA for a while, where John worked on a farm. They eventually moved to Western Maryland, where John found employment in the Georges Creek coal mines. John and Catherine made their home in Eckhart. He was one of the many Georges Creek coal miners who contributed money in 1898 to purchase the Beall’s Park property. Upon this land was built Frostburg Normal School No. 2, now known as Frostburg State University. In November of 1908, John Hausrath passed away and was buried in Eckhart Mines Cemetery. Less than eight months later, Catherine followed, and was laid to rest beside her husband.

John and Catherine’s son, George, was born in March of 1870 in Germany. In 1890, he married Mary Louise Walbert. Like his father before him, George was a coal miner. He worked in the Consolidation Coal Company’s Ocean Mine No. 1, near Midland. On Thursday, January 26th, 1911, George was removing the “stump” (the roof pillars) with his son John, John Shearer, and Earl Brinegar. They had the car almost loaded when the place “started to work,” according to the mine inspector’s report. As George tried to push the car out of danger, he was killed by a roof fall. He was covered up in such a manner that it took six hours to remove his body.  George left a wife and twelve children to mourn his loss. His body was taken to the Hafer Funeral Home in Frostburg, where a coroner’s inquest was held. According to the Cumberland Evening Times “the family has the deepest and most heartfelt sympathy in their sad bereavement.”

While George was working in the Ocean Mine, the family rented a company house at “Ocean Heights.” After his death, they were forced to move out.  In 1922, several of George and Mary Louise’s adult daughters went together to buy their mother a home in Gilmore. As a token of their affection, Mary’s daughters planted a climbing rose bush in their mother’s yard, a “Seven Sisters Rose.”

The travails of the Hausrath family were far from over. On September 27th, 1926, 23 year-old George Hausrath, Jr. and 20 year-old Steven Leptic were working with foreman Benjamin Ritchie and three other miners in  Consolidation Coal Company Mine No. 10 to widen a room for a haulage way. The men were eating their lunch at about 7:50 pm. George and Steven finished before the others, and decided to go take a look at a large rock that they were planning to blast out of the ceiling. The two miners were sitting under the rock, trying to decide where to place the explosives, when the rock fell unexpectedly, crushing both of them. The rock that fell was eight feet long, two feet wide, and twenty inches thick. The bodies of the two miners were removed to the Durst Funeral Home in Frostburg. George was later taken to the Eichhorn Funeral Home in Lonaconing, and laid to rest in Frostburg Memorial Park. He left a widow, Elsie May (Simpson) Hausrath, and a 2 year-old daughter, Mildred Evelyn Hausrath. Steven Leptic’s father and older brother had died eight months apart between late 1919 and the following summer. Steven was the sole supporter of his mother and his younger siblings at the time of his death.

The tragic death of George Hausrath, Sr., and the two young miners George Hausrath, Jr. and Steven Leptic, fifteen years later, left three families to struggle under an unfathomable burden of grief and poverty.  Workers in the underground coal mines in the late 1800’s lived a day-to-day existence. Many sacrificed their dollars to purchase the ground where Frostburg State University now stands, knowing that future generations would have an opportunity to live a better life.

The Hausraths were all coal miners, and according to one of their stories, the men would always gather around the breakfast table each morning, before heading off to work in the mines. As men are inclined to do, they would each brag about who was the best, and about how much coal they could load in a day. Mary (Fair) Hausrath, wife of Carl Hausrath, used to say that there was more coal dug around the breakfast table than there was in the mine. Our committee would like to thank the Hausrath family for sharing their history, sad tales, and amusing anecdotes.